When asked to name a dog breed, most people have no problem rattling off the most common dogs: Retrievers, Chihuahuas, Dachshunds, Pugs, or even Rottweilers. How many people know to mention a Pumi dog, though? How many have even heard of a Pumi before? Probably not many. So let’s introduce you to this fascinating breed. Who knows? You may find your new best friend! 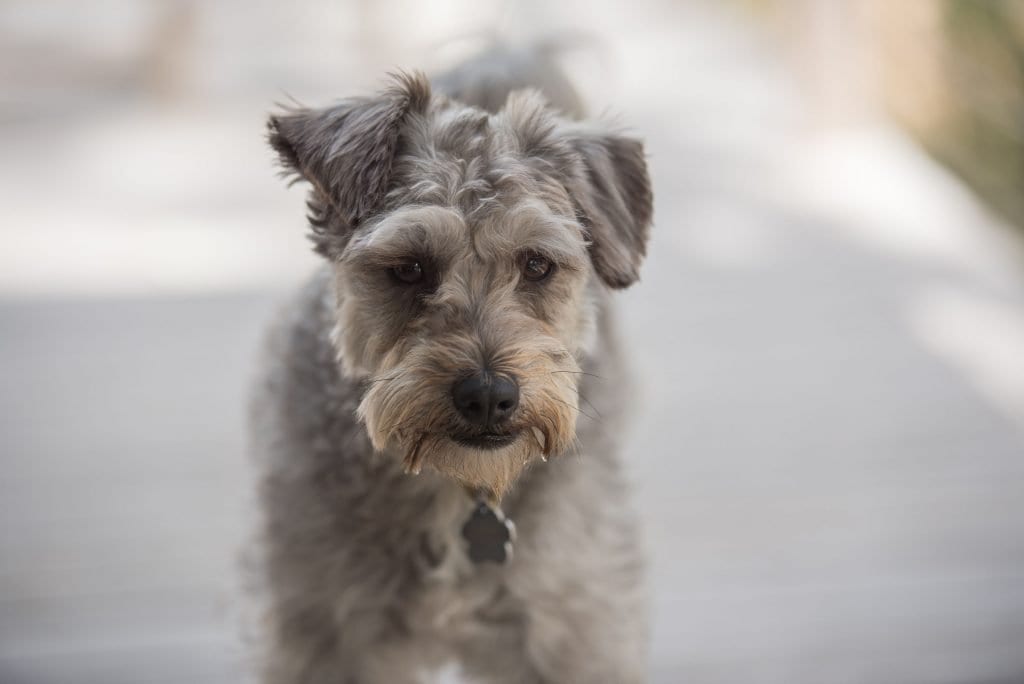 Herding and Hungary go hand-in-hand. As such, it’s no surprise that three sheepherding breeds arose from the region, starting as far back as 800 AD. (That’s a rough guess) Those three dogs are: the Mudi, the Pumi, and the Puli. (Yes, I know – they sound similar, but they look very different)

Most experts believe the Puli started things, migrating with hunters from the Tibetan region. They likely have some Tsang Apso in their ancestry, giving them a native intelligence and tenacity, which they passed on to the Mudi and Pumi dogs.

As French and German traders moved through the region, interbreeding of everyone’s herding dogs naturally took place. Spitzes and shepherds produced the Mudi, which straddles the line in appearance between the dreadlocked Puli and the curly-coated Pumi.

Pumik (yes, that’s the correct way to spell the plural for Pumi dogs) came about when breeders started introducing sheep poodles and herding spitzes into the bloodlines. The smaller size, combined with a natural intelligence, made them the perfect choice for herders moving their sheep from pasture to pasture along narrow roads. Pumik showed no problems darting among the sheep and the cornfields, using their sharp voices to stay in communication with each other and keep the herds in check.

At the beginning of the twentieth century, Hungary identified and separated the three dog breeds. The Puli came first since it dominated eastern Hungary. The Pumi dog followed close behind, filling out the mountainous region of the country. And the Mudi brought up the caboose, filling out southern Hungary.

The Pumi dog only recently caught the attention of dog fanciers. Unlike more familiar breeds, this spunky pup didn’t start making its way to the United States until 1993. Taru Parvin (originally from Finland) fell in love with and imported her first Pumi dog that year. Not long after, in 1998 and 1999, three Pumik followed, entering the homes of Mary Reardon (Jojo), Wayne Fessenden (Miss Eva), and Chris and Tom Levy (Mano). Mano became a World Winner Pumi dog in 2001 and took Best in Show in the rare breed category in the United States. Unfortunately, Mano showed signs of hip dysplasia. The breeder felt bad and offered to lease a top female to the Levys. The Levys whelped a litter, and with Ms. Parvin bringing in two more Pumik herself, the breed quickly established its hold in the United States.

What’s in a Name?

In the earlier 2000s, the collected owners of the Pumik found themselves meeting year after year at American Rare Breed Association (ARBA) shows. They felt a club for Pumi dogs made sense, but there were so few – not just dogs, but members themselves. They needed enough people to form a Board of Directors, not to mention at least 100 faithful, active members to fill the club. (The AKC sets this standard)

By 2005, everyone felt strongly enough about the breed to take the plunge. Eight Pumik were entered at an ARBA Specialty show that year, and they moved forward with creating the club. The Board of Directors was created, with Chris Levy stepping up as President. But then came the big debate: what to call their breed club?

The Puli Club of America already existed, and Pumi and Puli sounded WAY too similar.

Not to mention that the abbreviation “PCA” worked for the Poodle Club of America, too. They wanted something more unique, something that stood out as much as these dogs.

Someone suggested “American Pumik Club,” but the breed didn’t originate in the United States.

Suddenly, the light bulb went on: “The Hungarian Pumi Club of America.” Everyone agreed, and the paperwork went through to make the club official.

On January 1, 2008, Pumik were allowed to officially compete in the AKC as a Miscellaneous Class under the Herding category. However, it took another eight years before they achieved official recognition as an AKC breed. Why so long? Well, there’s a hefty process to meet the demands of the AKC:

The Pumik and their followers persevered, though, and in 2016 the Pumi dog became the AKCs 190th recognized dog breed. And, of course, they’re members of the Herding Group.

Pumik capture the imagination with their short, curled coat, spiral tails, and enchanting expressions. Their ears stay at half-mast, catching every word you say, and those deep, dark eyes assure you they’re the best of listeners. They have compact bodies – perfect for weaving in and out among herds of sheep – and nimble toes that bounced them around rocky terrains. If you’ve fallen in love with one – at a dog show or even through some internet scanning – make sure you understand exactly what you’re getting yourself in for. These intelligent pups put strong demands on their owners.

Nothing beats a dog breed requiring minimal grooming, right? The Pumi dog’s coat consists of a 50/50 blend of soft fluff and a harsher outer layer. The two come in at the same short length and swirl into that expected corkscrew pattern. For those who cringe at the thought of fluffballs rolling through the house, you’re in luck: Pumik don’t shed! You only need to comb them about once every 3-6 weeks, followed by a spritz with water to bring the curls back up.

Skip the blow-dryer, though. If you apply heat after the rinse, you’ll lose those adorable curls.

Like most dogs in the Herding Group, Pumik are intelligent. They needed to think fast on their feet, anticipate the shepherd’s needs, and plan for wayward members of the herd. This means you need to engage that agile mind ALL the time. Early socialization of Pumik puppies is a MUST. You also need to establish your position as the household’s boss, or you’ll find your little herder running the household for you. They’re champions of manipulation, and if you aren’t prepared to take the reins, things can quickly spiral out of control. Pumi dogs DON’T make good choices for people with minimal dog experience.

On the plus side, this breed excels at obedience competitions, and they’re easy to train. You’ll find them falling into patterns with you. (So if you love order and organization, expect your Pumi to join in) Look for as many ways to provide mental stimulation as possible. Puzzle toys are mandatory for these canines!

Pumi dogs are NOT city dogs. These compact little pups need space to run, play, and expend energy. Regular exercise – MORE than a daily walk – ranks at the top of their To-Do List. They’ll climb in, under, and around everything they can find – whether you like it or not. If you can’t channel that energy into something productive (Pumik make excellent agility dogs!), expect to see destruction.

Remember, this is a herding dog. Herders are working dogs, and they insist on having a job to do. If you fail to provide that work, they’ll FIND something to do. Unfortunately, it’s usually not something productive.

“A Pumi is an intelligent, active dog that needs a job to do. It must be with an active family that enjoys activities with its dog. The Pumi is very centered around its person or family, which it considers its flock. It is concerned when its flock is separated from each other or they from their flock. A family needs to understand this perspective before deciding to own a Pumi.”

A lot of herding dogs tend toward the stand-offish. And, with strangers, Pumik show hesitancy and wariness. However, with their families, they’re sensitive and crave plenty of attention. This isn’t a dog you can leave on their own for long periods. You’re also getting a canine with a LONG memory, meaning they won’t forget that time you took a weekend away, leaving them with nothing to do but stare out the window. If you don’t have the time to provide the attention and snuggle time your Pumi craves, you should consider another breed.

And don’t forget that sharp bark. Pumik needed a way to communicate over long distances while herding sheep. They’ll bark to gain your attention, and it isn’t something you can train away – it’s a part of who they are. While they’re intelligent enough to understand when NOT barking is appropriate, you need to accept the barking as part of your life. Yelling or protesting the sound will only upset your sensitive pup.

In general, Pumik don’t suffer from too many health problems. If you’re purchasing from a reputable breeder, they’ll follow established breed guidelines and perform screening on all puppies. The HPCA requires testing for all of the following:

Every dog breed brings its own unique characteristics, as well as its own following of admirers. The Pumi dog may be newer to the scene than some of the familiar breeds out there, but they aren’t short on fans. How can you resist that curly coat, the inquisitive ears, and that playful intelligence? It’s the perfect package!

What Does it Mean When a Dog’s Nose is Dry?

Diary of a Kalisi: A Cat Ownership Odyssey

How Truffle Dogs Are Trained to Scout Buried Culinary Treasures

Special Cats Up For Adoption That Need Your Help!

Diary of a Kalisi: A Cat Ownership Odyssey

The Ultimate Guide to the Pallas Cat

How One Man Built a Dream Home for His 22 Cats

Best Small Dog Beds: These Beds Are Made for Your Smaller Breed